What Are the Alternatives to Xarelto?

I. Why Use a Xarelto Alternative

b. Xarelto, a Novel Oral Anticoagulant

V. Xarelto vs. Eliquis and Other Anticoagulants

VI. An Antidote for Anticoagulant Side Effects

Xarelto is a popular anticoagulant, but it’s not the only one out there. If you would rather take Xarelto but for whatever reason cannot, you have other options. There are several alternatives to Xarelto including, Warfarin, Eliquis, and Pradaxa. Your doctor will determine which medication is right for you.

Why Use a Xarelto Alternative

There are many legitimate reasons why a patient may want to switch from Xarelto to a different but similar drug. Reasons for switching include:

So if you’re shopping around for a new anticoagulant, you’ve come to the right place! Remember, this article is meant to be taken as general information only, not medical advice. Use it as a jumping-off point for having a conversation with your doctor. Never change up your prescription drugs without first consulting a health-care professional. 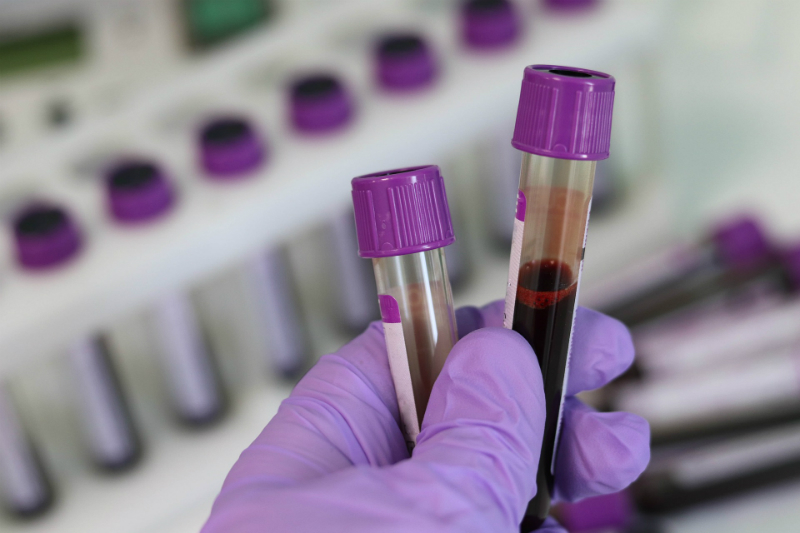 First, let’s review what anticoagulants are.

Also known as blood thinners, anticoagulants help prevent the formation of blood clots. Blood clots in your veins and arteries can block blood flow and cause a pulmonary embolism (PE) if it happens near your lungs, among other possible complications.[1]

Antiplatelets are also known as blood thinners but are in a different family than anticoagulants. Antiplatelets include drugs like aspirin that prevent platelets (a certain type of blood cell) from clotting. Meanwhile, anticoagulants work by slowing the body’s clotting process down.

Xarelto (generic name: rivaroxaban) may be prescribed to a patient who has recently undergone surgery for a procedure like a hip or knee replacement. Because of patent laws prohibiting a generic version of Xarelto, there is currently no generic alternative for Xarelto. [2] It is sometimes grouped together with other medications of the novel oral anticoagulant (NOAC) group like Eliquis (apixaban) and Pradaxa (dabigatran).[3] 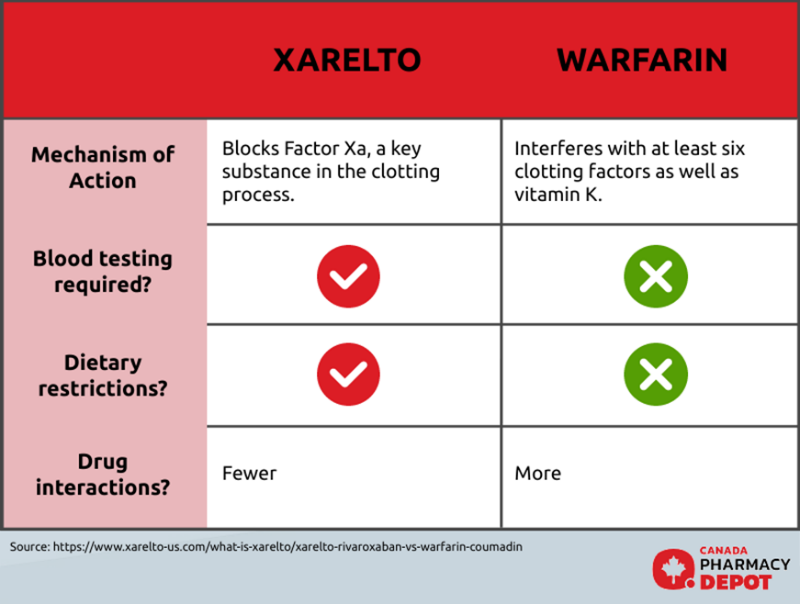 Before Xarelto, there was warfarin.

Because aspirin also fights clotting, some patients may wonder whether they can switch from Xarelto treatment to aspirin treatment.[5] Aspirin may be more affordable because it is widely available as a generic and can be bought over-the-counter.

A recent study found that aspirin may be a good way to prevent deep vein thrombosis (DVT) after a lower limb surgery.[6] The study also noted aspirin has a safer side effect profile and is more cost-effective.

But never buy aspirin yourself with the intention of starting daily aspirin therapy without first consulting with your doctor. It’s not the same thing as taking a daily multivitamin.

Your doctor will carefully weigh the benefits and risks of using aspirin. One well-known risk of aspirin is an increased risk of bleeding. This bleeding isn’t restricted to getting a cut; some risks include internal gastrointestinal bleeding, which may not be immediately noticeable.[7] 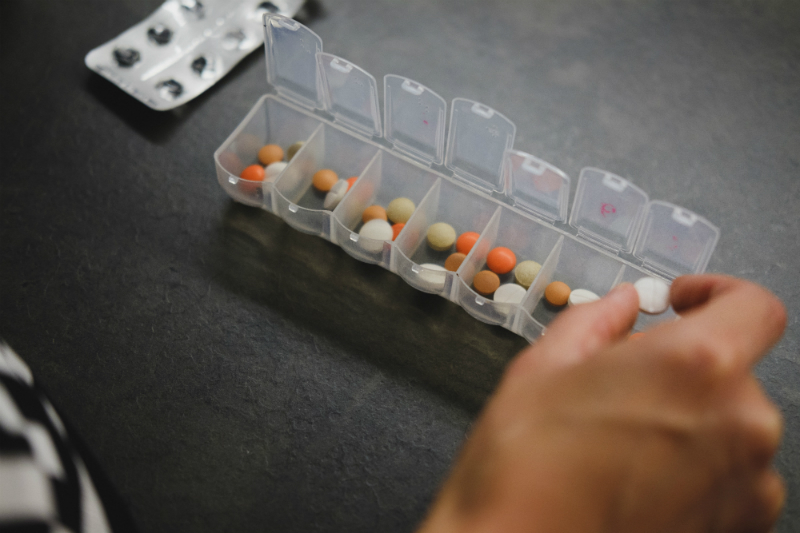 Xarelto vs. Eliquis and Other Anticoagulants

But what about Xarelto versus its more closely related drugs? What’s the difference between Xarelto and other NOACs like Eliquis and Pradaxa?

There are many complex ways in which these drugs are similar and/or different. In choosing the right drug for you, your doctor will take stock of your full medical history, including any existing medical conditions, your age, sex, and other factors.

So be sure to tell your doctor as much as you can about yourself. This will aid in their prescribing process.

Here are just some unique recommendations about NOACs given by the UK National Health Service:

Again, make sure you have a thorough discussion with your doctor. Be sure to notify them of other drugs you use too, including both prescription and over-the-counter drugs, recreational drugs, and supplements (vitamins and herbs).

An Antidote for Anticoagulant Side Effects

The most well-known adverse side effect of Xarelto and other anticoagulants is uncontrollable bleeding. Warfarin carries this risk too, but vitamin K has long been used as an effective antidote to warfarin’s adverse effects. Pradaxa (dabigatran), a similar drug to Xarelto, also has an established antidote called Praxbind (idacrucizumab).

Recently, the FDA approved a Xarelto antidote called AndexXa (andexanet alfa) in 2018. It works for Eliquis, Xarelto, and Savaysa (edoxaban).[9] 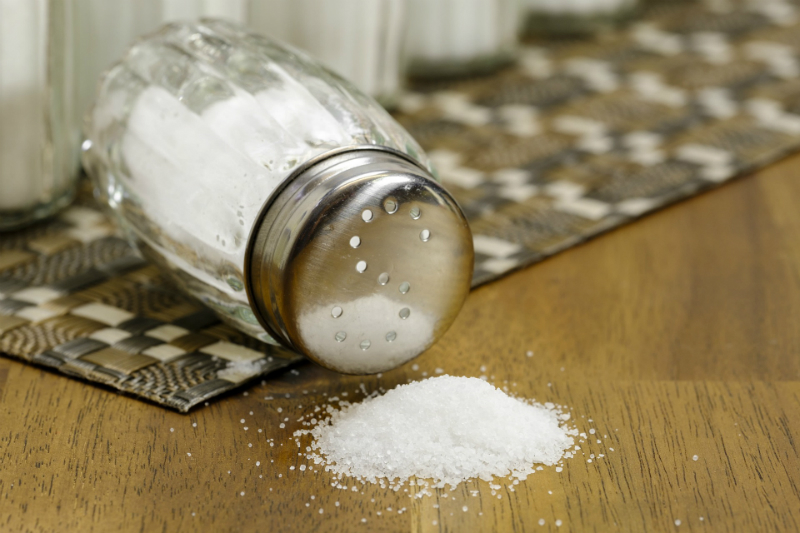 Lifestyle Changes and Other Preventive Methods

For example, one doctor recommends staying active for at least 30 minutes a day, six days a week.[10] Avoid being immobile, as that is when your risk of developing clots rises.

Preventing dangerous blood clots also begins with education. Familiarize yourself with the characteristics that raise a person’s risk:[11]

You can also discuss the following solutions with your health-care provider:

Have more questions about Xarelto? Contact us to speak to a licensed pharmacist. Or place your order today and save on Xarelto, other blood thinners, or other medications you need to stay well.

What Is Xarelto, and What Is It Used For?

When Will Xarelto Go Generic?

Why Does Xarelto Cost So Much?

How to Take Xarelto Safely